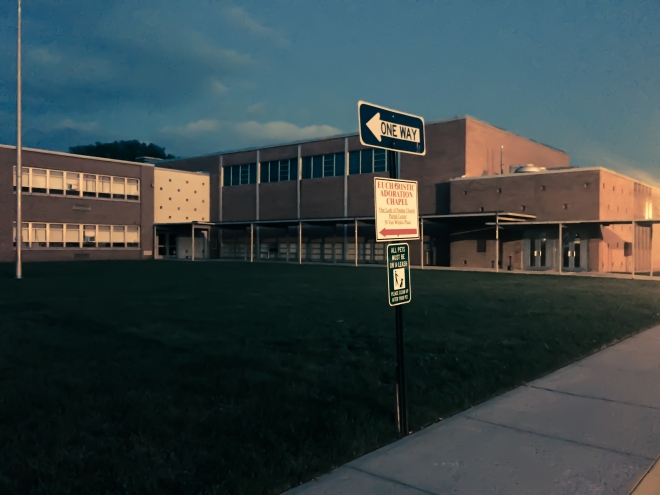 I spent my middle school years wearing white polo shirts tucked into dress pants – prayers three times a day, service at the church every first Friday. It’s a routine I only came to know once my parents suddenly decided to pull me away from Piscataway’s public school system and plop me down in a private Catholic school for a few years. Nowadays, they’re (my folks, that is) as devout as ever, and I’m a tad less so, but there’s a lot of good tied into that old school building. The more I think of it, the more I appreciate exactly how good those years were.

Of course, everyone yearns for their childhood to some extend. Hope you’ll indulge me a little here.

The grade system in the school was a bit odd – it was a K to 8th institution with a grand total of one class per grade. That meant that if you started school there in Kindergarten, it wouldn’t be bizarre to go through your middle school graduation ceremony with a majority of the other toddlers you were bopping around with. Couple that with a small class size (I only had about thirteen kids in my graduating class) and you have a number of groups of kids forced by right of proximity to forge a relationship pretty close to family. There were no cliques, there were no factions – just little people constantly in extended interaction, unknowingly making some of the best friendships they might ever hope for.

I don’t talk to many people from there anymore. I don’t think my case is too different from the others.

But ask me if I have any stories left over from that time, and you’d keep me talking for days. I’d be able to quote countless games of football on hard parking lot asphalt. Countless shitty inside jokes that would find themselves repeated and circulated into oblivion. The time we all took a field trip to a shrine and collectively got a stomach bug from drinking the “holy water”. Playing baseball with tennis rackets because our gym equipment was utter shit. Being part of a weird little family, at least for a little while.

The school closed a while back.

Catholic and private schools really aren’t doing so great around where I am, so the story’s rather common. The doors shut from an inability to keep the place running sufficiently. Now the place operates as a…hell, I’m not even sure what it is, anymore. I see people going in there to use the old gym for community basketball games, and the smaller rooms being used for pre-k sessions. But I’m not even sure when and if the other rooms are even still in use. It’s hard not to hope sometimes that I’ll sneak in there one day and find the old desks still in place – marked up in pencil, familiar handwriting and all.

It’s odd walking by places, knowing they’re not what they were. Buried somewhere underneath is the memory. The old routine. The page from the scrapbook. The simplest of things.